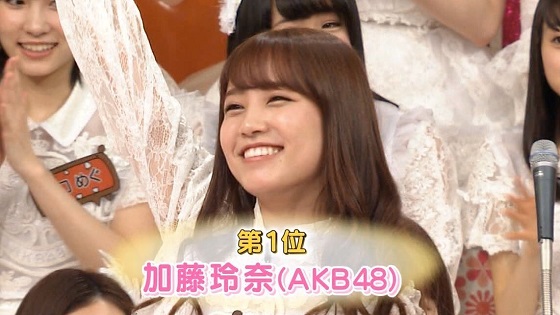 In TV show AKINBGO's Lucky Girls Ranking 2017, fortune teller forcasts Team B memer Kato Rena will be the luckiest girl of the whole AKB48 group in 2017, the episode has been aired on 17 January 2017.

Okay, even as far as forced management pushes go this is disgustingly obvious.
^
yeah sure. lucky in the sense that she's pushed a lot?

Okay.
Even if she doesn't rank in SSK-senbatsu she is till going to be picked for any A-side.
Let her be.

So management free advice from me, put all the money into 16gen.

You guys are talking like Renacchi has been the only pushed member from the group and while I used to think the same before knowing her better, been following her for a while and changed my mind. She can be pretty fun and straightforward (something refreshing with the recent pushes of imouto girls), and has good ideas (ex. Renacchi Sousenkyo) which helps to pay more attention to girls who aren't always management's first choice.

She also has a decent voice while singing and has grown to become a fashionable girl. Yes, her dancing may be a bit lazy usually, but she can pull out strong choreographies like Bokutachi wa Tatakawanai (she rocked in that video, and it clashes with her usual Oujou-sama appearance).

I agree she has been pushed, but let's remember that last year she got a good role in 'Nidome no Natsu, Nidoto Aenai Kimi', a film adaptation of the famous light novel. And no, it's not a 48-related project nor a b-horror movie. They have a good cast, and she is part of the main roles.

I'm not forcing anyone to like her, but truth is that she is improving. There are more and more people in the 48 groups and she somehow keeps moving forward, even with her ranking. She deserves some credit imo.

(Btw, I'm a Tomu oshi, but Renacchi is my second favorite).