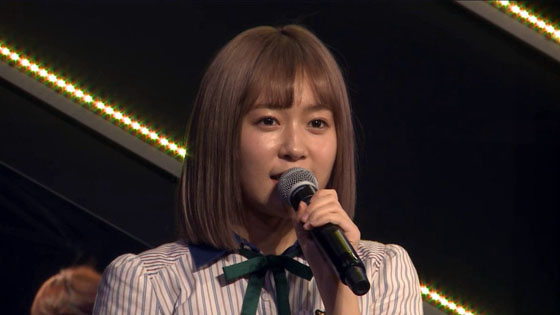 HKT48 Team KIV captain Ota Aika announced graduation in HKT48 Theater on 17 January 2017. Her graduation LIVE ceremony will be held on 10 April 2017.
Oita Aika sais she decides the date of her graduation live ceremony, because it will be 2 days after her 10th year anniversary date. Moreover she will graduate from the group in Team KIV Live performance.

Oita Aika also asked fans to see her before her graduation, while she is still an idol you can meet. After graduation, they will not meet each other.
Tweet

Am I suprised? No. Am I disappointed? Yes.

its getting more and more heartbreaking.. ex-watarirouka's remaining member now is only mayuyu... most of her 3rd gen comrades are already graduated.. its just mayuyu, yukirin, and who else left? myao?

Myao is 5th gen dude, the only ones left now are Mayuyu Yukirin and Tanamin, i´m not surprised though, it´s been a while since i saw Lovetan on any official event and stuff.
And HKT i´ts not faling apart!! with the new 4th gen and team, it´s better than ever!, remember , these are GENERATIONAL GROUPS, the generation change is going to happen, wether you like it or not.

Ah yea, sorry.. forgot about tanamin.. thanks for the correction man..

Bout HKT, I agree with you.. even without rabutan the group is still going strong i think, even compared with SKE's 8 gen, i rarely know about the news or appearance of them, but in HKT i think they've done a pretty good job in promoting (and supporting?) the young girls..

Yeah, AKB and HKT are doing a great job with their new gens, with the appearances of the 4th HKT gen on concerts and stages and AKB's 16th gen having their own solo concert and showrooms. NMB is promoting their 5th gen in a good manner as well, the only problem is SKE thou, they relied so much on their aces that when they all graduated the group is starting to lose ground, even Jurina herself thinks so. I hope SKE´s managing get to realize that
I agree with the first comment.

Shame that the old members doesnt let them shine at all...

Don't know about other platforms, but in these comments nobody badmouthes SKE, dude. NMBs 5th and HKTs 4th got some media appearances and AKBs 16th gen has a concert, so SKE not doing a lot for 8th gen is fact. If I'm wrong, please provide me with information, since I would like to learn more about them. I found their last stage appearance rather meh.

I'm not happy about Love-tan going. But I think she got the right time, so I wish her all the best for the future. I'm looking forward to her choosing the new KIV captain!
the last paragraph...
does it mean he will left showbiz?

It means that she is graduating because of marriage and her husband is a jealous guy.

No, she's going to purse being an actress. The whole of concept of the 48Groups was "idols you can meet," so once she graduates she'll become like any other celebrity.