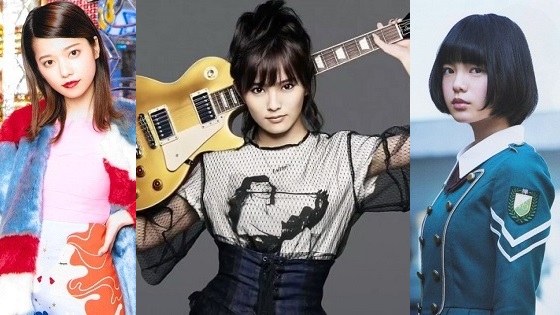 Nogizaka46 had a great progress in 2016, their latest single sold over 900,000 copies, and their top member Nishino Nanase's photobook was best selling (87,209 copies) photobook of the year, another member Ikuta Erika's photobook's sales over 76,000 copies (3rd place in topsellers ranking). Moreover, Nogizaka46 released their own mobile game "NOGIKOI" in April 2016 with over two million downloads. Nogizaka46 really matches up their official rival: AKB48.

NMB48 member Yamamoto Sayaka made her solo debut in 2016, she released her album "Rainbow" in October 2016. For another sister group SKE48, their top member Matsui Jurina have signed a new talent agency "IRVING".

In 2016, NMB48 changed their CD distribution to SONY's forTUNE music, and changed their talent agency to Showtitle, those arrangements will make NMB48 more independent from AKS and Kyoraku's management.

2016 was not an easy year for AKB48 group fans, popular members Takahashi Minami, Watanabe Miyuki and Shimazaki Haruka left AKB48 group, top member Kojima Haruna is going to graduate. For AKB48 group's next generation, future stars Owada Nana and Yabushita Shu announced they will graduate from the group as well.

AKB48's Niigata group NGT48 opened their own Theater in January 2016. In 2016, NGT48 had their TV show on Nippon TV  with another group HKT48, had their TV series "Higurashi When They Cry", and NGT48 also participated in AKB48's 43rd single with their original work "Max Toki 315-go".

AKB48 group/46 series producer Akimoto Yasushi launched a lot of new projects in 2016, and one of his project SHOWROOM LIVE provides a new video streaming platform for AKB48 group and 46 series, and it is not only for the official events, but also gives members to promotes themselves through their own Showroom.

Note: SHOWROOM LIVE is a public video streaming platform and virtual LIVE space for Japanese idols and talent, not for AKB48 group and 46 series only.

10. Maeda Atsuko and Oshima Yuko back for 10th Anniverary Single

AKB48 celebrated their 10th anniversary with 43rd single "Kimi was Melody" released, for this meaningful single, original Kami Seven members including Maeda Atsuko and Oshima Yuko were back and participated Music Video shooting.

Showroom is not founded by AkiP.

I think Paul meant that Aki P allow them to do SHOWROOM. Not founded it.

nice post, really nogizaka46 were great at 2016. It will be good if first line members continue at 2017, chance to won akb48 at single sales.

Showroom not founded by Aki-p

Akimoto Yasushi is not Showroom founder, he just promote it in 2016.

Great list Paul! I agree with all of this. I would say Keya46's release of Futari Saison was pretty epic too. Actually all of their releases so far have owned. Expect good things from them in 2017. But yeah, super good list!

Keyakizaka46 came up with a catchy single and i think it will worry some girl idol units to this date especially the 48G hopefully,no graduating members for this group for now.
↑ Back to the Top