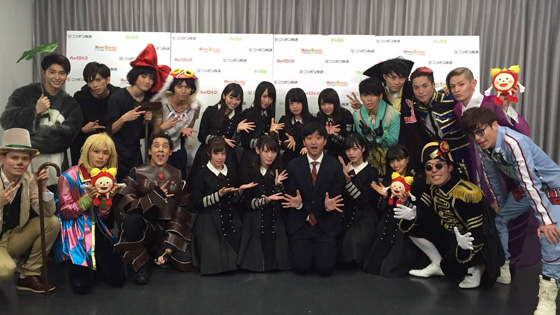 MUSIC ON! official web site announced they will cancel the broadcast of halloween event "PERFECT HALLOWEEN 2016", which was schedule to be aired on 5 November 2016.
According to the official announcement, The cancellation is due to recent news related to Keyakizaka46, and the event organizer agrees to cancel the broadcast after negotiation. It will be replaced by another show "J-POPS version! Best of Million Hits of History"

All this overreacting to a piece of cloth but we still have 'murican related content in Japanese media ( like the latest SSK photobook) that no one cares to ban even when 2 atomic bombs hits Japan directly bringing hunger and death to millions.
Year after year Japanese companies are getting more and more weak against Western culture even we don't really care about this kind of things anymore since we use it all the time in movies and videogames that are far from getting canceled or banned.

'muricans and their bosses the Jews. I can't wait for Japan to start banning all the American/Israeli media and culture for the two bombs and the Palestinian genocide.

What is even more stupid about the whole thing is the fact, that Sony was rebuked before for clothing Kishidan with nazi themed costumes. Internet is always overreacting to everything, but it seems Sony didn't learn a thing from that incident. So before everyone goes political here, regard that Sony should have known better. This is at least what makes me angry about the whole thing

This has gotten way too silly, people so overly sensitive about anything nowadays
↑ Back to the Top