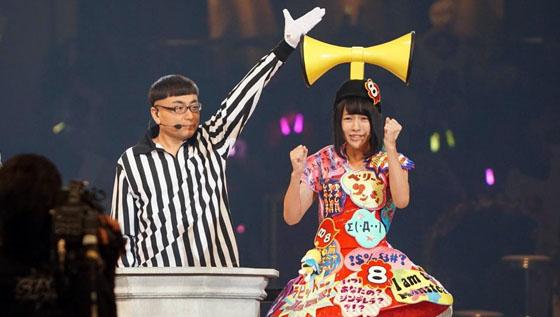 All AKB48 Team 8 members held an unofficial online meeting in SHOWROOM on 26 July 2017, the meeting was to discuss if they should form a unit "Team 8" for upcoming AKB48 group Janken Tournament.
For members who agree to form a Team 8 unit, their reason is they want to release a CD, even they do not win, at least they declare their intention to have CD debut, and form a "Team Unit" is meaningful and attract people's attention, and some members disagree the idea, because it is too risky, and it will give a great pressure to members who participate the Janken. Until now, they do not make decision.

Note1: Some members express their thought in 755 after meeting
Note2: Except Kansai region, other 5 regions agree to form an unit

Background of AKB48 and Team 8, Team 8 is a team of AKB48, it was formed in 2014, and sponsored by Toyota. Though they are called a team, you can name it as a sub group or even an ally of AKB4. Team 8 have their own concept, their concept is "Idol who go to meet you" instead of AKB48' s"Idol who you can meet". Team 8 has their own web site and their own tournament, but they don't have their own CD.

For Janken Tournament, Team A, K, B, 4 members could participate the game directly, but Team 8 had to have a pre-game first to pick the representatives for Team 8, it is unfair to Team 8. On the other hand, Janken Tournament offers an opportunity of CD release to winner, which is Team 8 members are long for.
Tweet

Why don't Team 8 just play rock paper scissor among themselves to pick their top 16 for their subunit?

I hope they get a CD debut with a victory, but perhaps its a sweeter victory for any other team that knocks out 45 members in one fell swoop. Osaka Talent agencies tend to do their own thing so it makes sense if Kansai wants its own group. It runs in their blood to the West. Some of the members had their meeting live on showroom and it was strange to say the least.
↑ Back to the Top