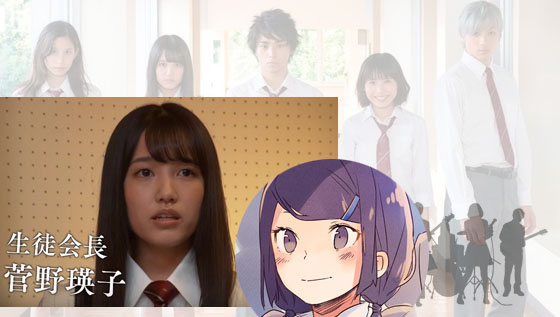 Japanese movie "Nidome no Natsu, Nidoto Aenai Kimi" movie trailer has been revealed today, AKB48 member Kato Rena will play Kanno Eiko who is a student council president in a high school , the movie will be released on 1 September 2017.


"Nidome no Natsu, Nidoto Aenai Kimi" is a time travel + band music + love story, Satoshi (Murakami Nijiro) is in the 3rd year of high school. He and transfer student Rin (Yoshida Madoka) are busy forming a band to perform at the school cultural festival even though there is a ban on forming bands at school.

Satoshi loves Rin, however Rin is infected by a incurable disease. At the last days of Rin, Satoshi makes a love confession, and Rin's feedback is "Sorry".

On the other hand, Satoshi gets a chance to goes back in time to when he met Rin for the first time. Satoshi decides to change his one and only summer with Rin.

The movie is based on the light novel "Nidome no Natsu, Nidoto Aenai Kimi" by Akagi Hirotaka

Note: Second Summer, You Who I Can not Meet Again (literal title)