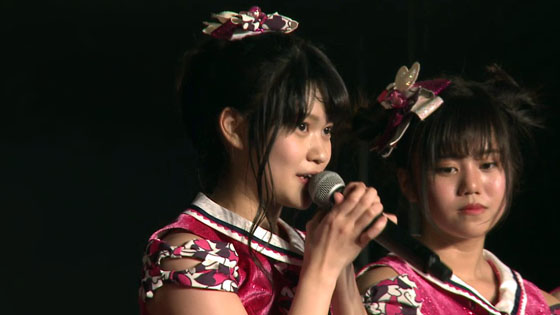 SKE48 Team S member Azuma Rion announced her graduation in SKE48 Theater on 14 February 2017, she did not explain why she graduate from SKE48, and she will stay in the group until the end of March 2017.
Azuma Rion is SKE48's 6th generation member and one of SKE48's promising future stars. Before joining SKE48, she had passed the 4th generation audtion of a Hokkaido-based idol group "Team Crerekko" in 2012, but then she resigned after passing SKE48's 6th generation audition.

Azuma Rion's stage debut was SKE48 research student LIVE on 26 March 2013, and then she was promoted to Team E in April 2013, she was transferred to Team S in 2014 AKB48 Group Team Shuffle.
Tweet

She's my SKE oshi..😢😢this news is the worst of the week. Why so many SKE graduations lately?

Did she give any reason? She was still so promising ... I loved her duet with Nao :'(
NO WHAT THE HELL

I already knew I shouldn't let my guard down until Feb was over... but no, not Rion dammit.
With her talents, I hope that's not the last we see of her...

Well, it was not unexpected. Rion was devastated when she was not ranked in last yr ssk; everyone thought she would go higher than the yr before. The thing is that she was one of the few ske girls that got pushed from the start and had more opportunities than most. For whatever reasons she just did not click with most of the fans. Sometime it is good to take a step back before moving forward.
ESCAPE won't feel the same again
↑ Back to the Top