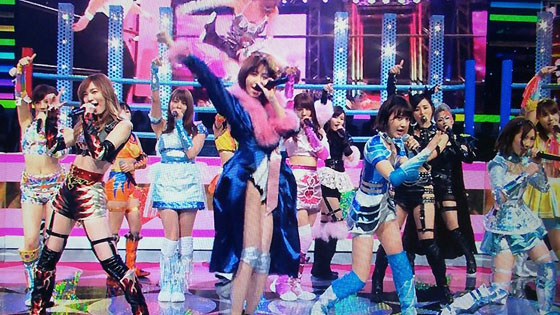 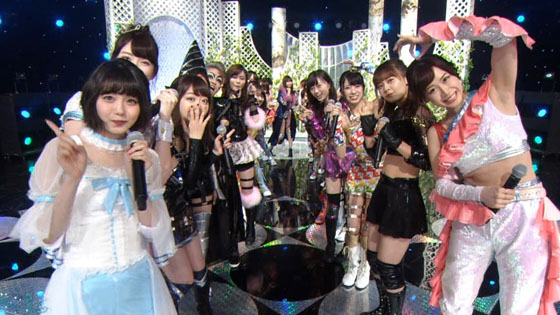 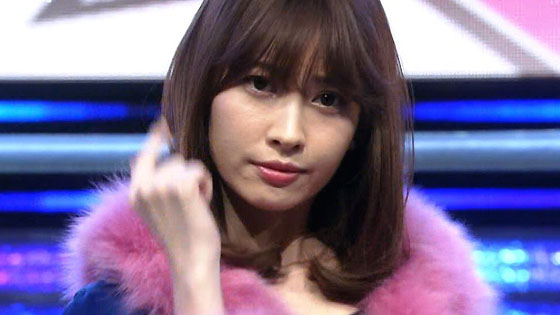 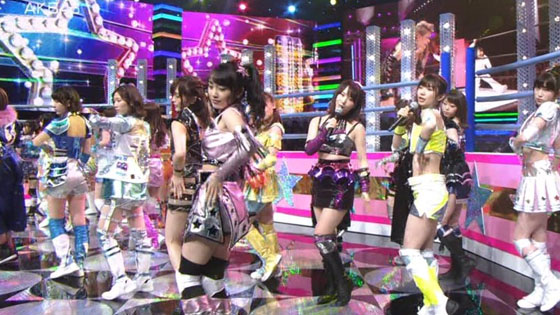 Shoot Sign is the theme song of AKB48 group TV drama "Pro Wrestling", the CENTER of the song is member Kojima Haruna, the single will be released on 15 March 2017. Pre-order on CDJapan:

Can't unsee that. Wish I never saw it.

You either die a legend or you live long enough to see yourself become Morning Musume.

I hate the song, the look and the dance it's so boring ...

nyanyan will have her own graduation song...
NMB is the only 48G group with decent releases these days...
Sad to say that this song is not what I expected it to be...it's like AKB is becoming one of the regular cliché idol groups. nyan nyan deserves better than this
funny that a comment should mention NMB having the only decent releases these days considering I believe they have and always have had the weakest releases out of all 48/46g. Especially now-a-days with their very uninspired dance music, awkward music videos and Sayanee center 100% of the time.

As for this, I like disco so I don't think the song is terrible... but the outfits are very bad... I haven't watched Tofu Wrestling yet but as far as I know Kojiharu isn't in it at all and it's definitely strange that they should give her the center position for a theme song of a drama she isn't in. For High Tension it was a similar situation, but at least Paru made an appearance... I wonder why they have such a problem now a days with putting drama theme songs in the b-sides like they did literally only a year and a half ago...

The song is a theme song and it follows that fomula. That is why eveyone is dressed in wrestling outfits. Get a grip.
I think you should rethink the thing about NMB having the weakest releases. To be frank, exept for AKB, NMB is the only sister group that I can listen to their songs without trying very hard not to skip em, especially nowdays. I'm not really sure about them having the weakest releases cus unlike the other sister groups, they don't promote their singles as much, sure, they post a short version on youtube and on AKB48SHOW like everyone else but that's it. If Sayanee is 100% times the center than what would you say for Jurina, i love that girl but I would be lying to say that she doesn't sometimes act like she completely owns that position and wouldn't wanna hand it to anyone else...at least NMB appreciates it's members with graduation singles unlike SKE who did it only once which was for rena. Yeah, I don't see the point of dragging NMB or any other group into this cus this is about Nyan Nyan's graduation single and I would love to see some decent critiques about it but i had to say this

^ then I have to say: don't. just give a decent critique. If a single is decent, is often a thing of taste and the Jurina Sayanee who-is-better-problem already messed up so many comment sections ... just don't.

As another disco-ish song, I think it's nice. But as a farewell for Kojiharu I honestly expected more. Green Flash and Heart Ereki were so good and quite a different tune. There are far too many girls on stage, so of course the choreo does not require anyone to move anywhere. They could put any girl in the 3rd row, she won't get screentime at all. That's sad for many fresh faces.
I'm hoping for some nice couplings now!
It's not like I wanted to "miss up" anything at all, and I wasn't the first one who brought It up if you haven't noticed already...I don't even know how it came to this but I was just putting my opinion into words.
I guess tthe coupling songs are the only streak of hope that is left...maybe Kojiharu's graduation song would be good
The choreography looks like it could be from any damn MoMusu song.

As a fan of thier more rocklike and edgy singles I wont be adding this to my play list. However I find it perfect for it's purpose.

Calling it like MoMusu is not really an insult. They are one of the most enduring idol acts in Japanese music history. There have been many times that they produced simular style singles... How varied can it get after hundreds and hundreds of songs and dance numbers if both are supposed to be the same type of group - Idols

The end of an Era?

I heard the song - got up & took the dog out for a crap & got a snack- then came back here... I HAVE NO Memory of the song (NONE) - I only remember Haruppi w/ devil ears & Jurina w/ that "I own the stage even when I'm not here" smirk. I didn't dislike the song...it just was utterly tame.

Someone above made the "Morning Musune" comment- Ouch but probably accurate. Jurina vs Sayanee = NO Contest. Sayanee owns her in every way. Even Sakura & Haruppi command a presence that is gentle but powerful. Even when you look at Yukirin or Mayuyu it's like they're saying "look at us (AKB)" but with Jurina it always feels like it's "Look at me! someday I'm going to rule all of this, get used to me know" or something.

I don't know any girls from SKE besides Jurina because it's all I've ever seen. Even Keyezaki & NGZK spread the love around. Sayanee trys often to shift the spotlight to others. That's what made the Milky - Sayanee dynamic fun.

Any chance we can get Kojima H to take Geesh with her? I can't sit thru a Geesh centered song & another 2 year long graduation victory lap.

^
to be fair SKE has some push member beside jurina
like ryoha, rara, nao, rion
and it's hard to not knowing suda and kaotan tho lol (and tani if you counted transfer member)

i guess you don't follow SKE, that's why you know none other than jurina
because i don't know NMB member beside some member who's equally pushed like ryoha etc