Goto Rara worries about her situation 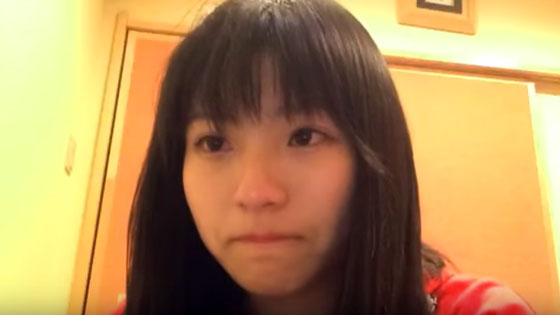 SKE48 Team E future star Goto Rara was crying during her SHOWROOM Live on 4 February 2017, according to her speech, somebody askes to provide better results, otherwise she can not stand in the front line anymore.

i guess this happen to a lot of them but they just don't publish it
but it's pretty unfair when they're forced to get better result when there's not much job for them to get it
even if they show result like suda, they still don't give her much outside work

This is more to do with talent angencies. The angency has leverage to promote someone who has more commercial value. If a talent has a large base they can pressure aks for more exposure. Members who don't have independent Angencies have to get direct backing from those in power in aks.

Why blame HER for something that is clearly management's fault?
It have been years since SKE management have done something right or worth of any salary at all.
Rara (and any non-Jurina girl) is doing the best she can with the little that SKE give her. Maybe she should consider a change of agency, she have all in her to be a great idol except the opportunities.
It's insensitive of them to put it all on a 14 years old kid...they didn't even give her promotions that really matter. A front row spot isn't good enough. Looks at all of the top 48Gs members....they get shows, magazines, senbatsu seeded in AKB, concurrency to help them. Why don't they actually give her more jobs or give her spots in AKB

Like I said it is because she is with akb48 own agency aks. She needs to get signed By a major agency like ohta pro.

For all those who says it is unfair about the Rara situation; let me just ask that when has management ever been fair to ske or its members. Even Jurina has relegated to the purpose of promoting other members that's not from ske in the last 2 - 3 yrs. And J hasn't reached 20 yet.

I get the impression that SKE is in a slump right now. They're the only ones without a regular program (if you don't count the once a month zero-position) and I've seen little to no commercial work from them.

but it's kind of understandable
with other non push same gen member waiting for getting their turn
and even there're few new gen member who gets a lot of attention from SKE fans
imo, maybe that "somebody" just warn her, but sometimes kids take warning as scolding, so.. who knows..

LOL Jurina was the most pushed member ever by a wide margin. It took a lot of screentime, centers and exposure just to get her to rank 3rd. It is better to get it naturally by earning it by building your own support, it might be a harder path but it is one that will carry you past AKB.

Ugh, no. Paru was the most pushed members ever, In that few yrs, the push was non-stop even the result did not justify the resource put in. I can understand why ppl feel Jurina was the most pushed member because she's been around for so long. But remember; when ske started, akb was a bunch of nobodies & aks did not has the resources to push members like they do now. And like the other post said, the push slow down to a crawl for the past 2 - 3 yrs.
^
either her or acchan. Jurina was just pushed in 48G but she never had agency to give her outside jobs and those two did. Paruru even belong to branch of Burning the biggest agency in Japan that got them so many jobs and she even got that controversial solo CM with JSDF
Nah, the most push member is sakura imo
They even put her as center for akb 10th anniv.
I feel like paru and jurina get as much amount of push
Sakura push=jurina+paru push combine (one again IMO)

But talking back about ske, why people keep blaming jurina when there's member like ryoha who's not showing much result after getting tons of push too?
I love ryoha but at least jurina push is getting somewhere
She gets high rank for SSK and HS sales
For me, looking from business part, even i'll put selling member rather than another no result push member
It might seems harsh but then its all about the money

I find it unfair to put blame on her.
She's doing her best but it's not just she herself ..... the management need to find jobs for her .... it's not like she is choosing jobs... there arn't much for her to spread her wings ....

Jurina was most pushed period. Why deny it. She was made center on the first AKB single released after she joined. She was top member in Ske48 and got the second most screen time for all akb singles pv even more than Yuko. Paruu might have been pushed as hard later but Jurina still gets the push after 10 years.

jurina rank is always going up, thats why she still gets push even after 10 years
she got a lot of screen time caused of senbatsu lock and kennin spot
anyway her screen time is declining after she cancel her kennin
people surely love to push her themselves in the comment section
this article is not even about her

As a fan, it always piss me off whenever we talk about ske we end up talking about jurina. But who got pushed the most between sakura, paru or jurina? Right now, it got to be sakura no doubt.
Jurina got pushed the longest since she is in the 48 group the longest between the 3. Like others said her push slow down quite a bit in recent yrs. she got pushed again recently because management got no other top members who are willing to stay for the next few yrs.
Let's face it, sasshi, mayu, yukirin, sayanee, they will graduated in a yr or 2.
Paru definitely got pushed the most, aks/kyoraku finance 2 of her movies and that's a lot of money & works. Even Acchan had only 1 movie finance by aks, yuko, tomochin, marikosama & jurina; ZERO.

Yuko got one densen uta. Jurina came into play because this is about a ske member who isnt getting a break. It provides a contrast. Ske has lost its best because of this, the fixation the promoters have with Jurina and to a lesser but understandable one with Rena left the rest looking like backroung dancers.

Jurina centered all but 2 Ske singles, centered 4 akb and also side a on every akb single except 2 rock paper scissors. She was the only one shot cover for non election singles.

Paruu was meant as a replacement member for 1st, 2nd and 3rd gen and that is why she was pushed as top of their class. Jurina was pushed as a top member all gens. Sakura is just a fill in for paruu because she was not working out amd was going to leave.

They tested several 4th plus members and settled on Paruu because she was recieved the best of the choices.