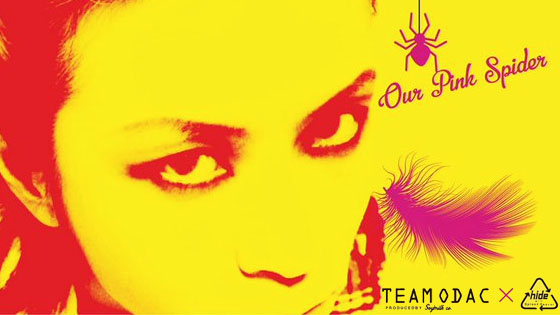 SKE48 member Sato Sumire and HKT48 member Ota Aika will appear in stage play "Bokura no PINK SPIDER", the stage will be on Kinokuniya hall from 9 to 20 March 2017.
"Bokura no PINK SPIDER" is a collaborative project between theatre production firm TEAMODAC and hide (1964 - 1998). PINK SPIDER was's hide (hide with Spread Beaver)'s 9th solo single song which was released in 1998.


Note: hide (13 December 1964 – 2 May 1998), better known by his stage name HIDE (as member of J-Rock band X Japan), was a Japanese musician, singer and songwriter. He is primarily known for his work as lead guitarist of X Japan, but was also a successful solo artist and co-founder of the United States-based band Zilch.

hide sold millions of records, both solo and as a member of X Japan. X Japan rose to prominence in the late 1980s and early 1990s, credited as founders of the Japanese visual kei movement. When they disbanded in 1997, hide focused on his solo career which started four years prior and went on to enjoy significant popularity. At the height of his fame, while recording his third studio album and about to launch an international career with the newly formed Zilch, he died in 1998 of what was ruled a suicide by hanging. hide was seen as an icon for Japanese youth rebelling against their country's conformist society and his death was labeled as "the end of an era." by New York Times.
Tweet